When I think of Austin, I think of BBQ and tacos, like all sane people should. And cowboy hats, because Texas. So you can imagine my excitement when I signed up to go to SXSW for my job: Networking, Learning AND TACOS?! Sold. Of course, Graham wanted to get in on the action so he came along for the trip sans SXSW badge. He was there for all the right reasons – to eat and drink. 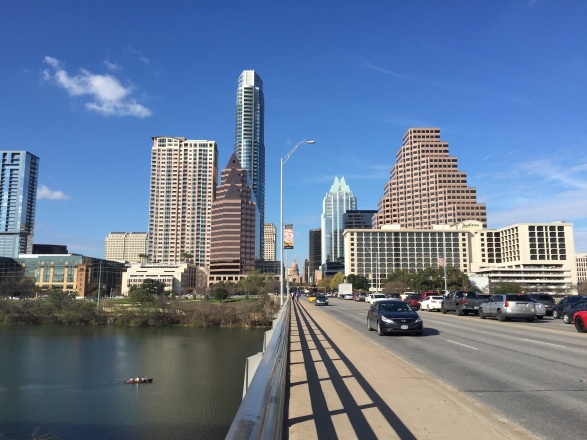 Downtown Austin from the bridge!

In-between the stimulating intellectual conversations and panels, Graham and I embarked on a culinary adventure armed with ample recommendations and (somewhat) empty bellies. Our first stop on said tour? La Barbecue, as recommended by no less than 5 friends who have traveled to Austin before. I know, I know, everyone talks about Franklin’s, but I wasn’t about to wait in a 6-hour line when La Barbecue is just as good.

About an hour-long wait to get our delicious BBQ.

We ended up having to wait just over an hour to dive into the BEST BRISKET I have ever had. See, I like red meat, but when it comes to barbecue, brisket is probably the last thing I would order. But just watching the La Barbecue pit master slice into one of those super juicy hunks of crusty meat made my mouth water in anticipation. I’m shocked I didn’t burst into meat sweats post-devouring of said meat, but they would have absolutely been worth it.

Best brisket I’ve ever had without a doubt.

Next was Odd Duck, a restaurant I heard a lot about from people and various reviews beforehand. The second we walked in, we felt at home. It had the same sort of atmosphere as one of our favorite restaurants in Decatur, Leon’s. All farm-to-table, super chill, and delicious drinks. 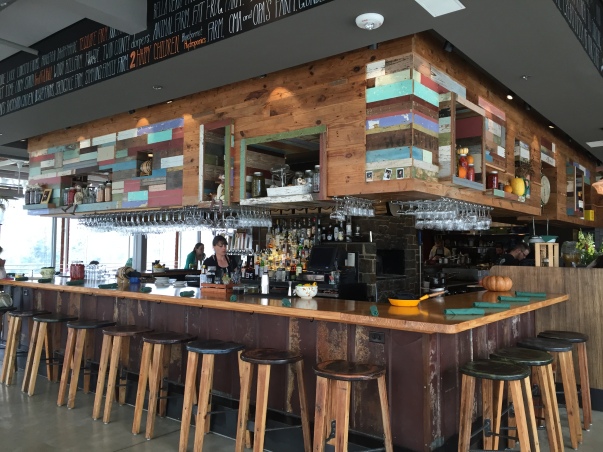 Love the atmosphere of Odd Duck

It’s a shared-plate kinda place, so we got a few smaller items and a big giant fish head to break into! I’m so pissed at myself because we didn’t get a picture of the fish head before slicing into it, causing incomprehensible carnage. But you know who DID take a picture? The awesome people at Austin ModHouse. Check out this beauty below. A little intimidating, but worth the work. 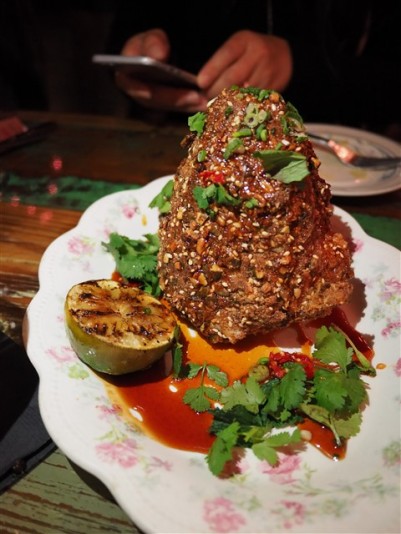 That was our clear favorite, but the sunchoke tots appetizer and crazy-inventive drinks were exceptional. We even came back a second time, for lunch instead of dinner. And lunch was freaking awesome, too. I got one of the best burgers I’ve had in a while, which involved pickled beet stems and a croissant-like bun. Drool-worthy, I tell you. 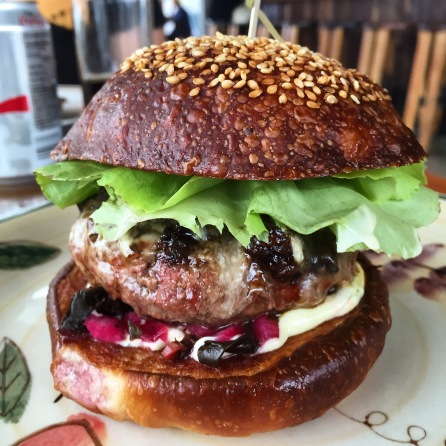 One of the best burgers I’ve ever had, at Odd Duck.

Austin has a LOT to be proud of when it comes to their food scene. The barbecue is nationally recognized and outstanding in a way that’s very different from Atlanta, but it’s all about the tacos for me. I had tacos for no less than 6 meals while there, 3 of them in a row, because tacos for breakfast are perfection. My first tacos were Korean-inspired from a food truck called Chi’lantro. They had a nice amount of heat and I really loved the heavy-handed cilantro on them. Pork was the clear winner over the chicken, and their fries were really good. They are famous for the Kimchi Fries, but I opted for the regular. Probably a mistake, but still great.

So what were my favorite tacos in all of Austin? Like all good Mexican food, it came from a little hole-in-the-wall that was very unassuming. El Taquito was just around the corner from our AirBNB, and I didn’t expect anything remarkable since it’s kind of a chain restaurant. Plus, of all the taco recommendations we had gotten from friends/family, it was not one of them. But omg they were delicious. Super authentic, great meat, a ton of salsas to choose from (which were all seasoned perfectly) and homemade corn tortillas. We ate here at least 3 times during our stay, one of which was a well-timed late-night stop. Look at these beauties. I mean, who puts a Chile Relleno in a TACO, let alone a Jalapeno Chile Relleno?! It was fantastic, as was the Chorizo. I quickly learned on this trip that I could eat Mexican food for nearly every meal and be totally fine with it. 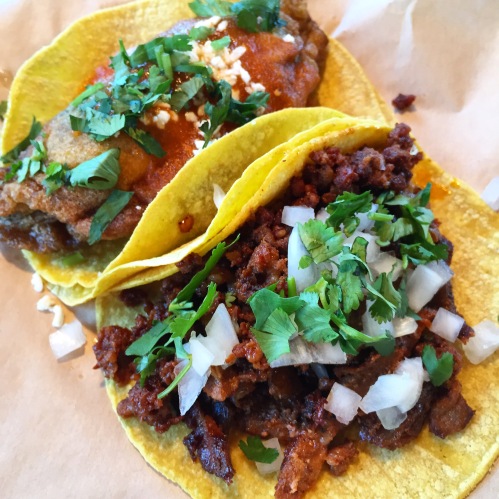 Another memorable stop on our adventure was Sway, a Thai restaurant mentioned by every single person we asked for recommendations. You can tell it’s a popular restaurant the second you arrive, with dozens of people sitting in the super-zen outdoor area. We sat at the bar expecting a long wait, but were seated only 15 minutes or so after arriving. Lucky us! Now we basically knew what we were going to order before even getting there, thanks to resident experts. We started with the Son-In-Law: braised pork shoulder with a crispy farm egg and chile oil. We were so excited (read: hungry) that I didn’t take pics, so thank you Do512 for these! It was gone within minutes, and was perfectly balanced. Plus, that EGG.

Onto the Jungle Curry – sweet baby jesus. We were warned that it’s a spicy dish, but we were sooooooo not prepared for what slid in front of us that Saturday night. A plate full of Texas wagyu beef, red chili, baby corn, eggplant, peppercorn, and the crucial coconut cream rendered us nearly kaput. It was one of the spiciest dishes I’ve actually continued to eat in my entire life. We went through probably 4 huge water bottles while powering through it, and asked for extra coconut cream to tame our poor tastebuds so we could punish them yet again. The problem (well, beauty) was that it was positively delicious. It had such a great balance of flavors, but the SPIIIIIIICE. Wow. My mouth winces in anticipation when I even think about it. But then again, I would recommend you get it if you happen to visit.

*Quick non-food-related side note* LOOK AT HOW CUTE THESE PUPPIES ARE!! Mophie, with a stroke of genius, had adorable Saint Bernard puppies running around, spreading joy and slobber all week long. Look at this brother and sister taking a little nap! I died. 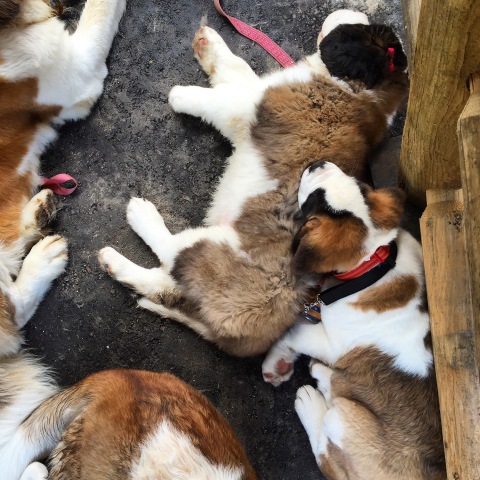 Ok back to food. Uchi is another restaurant I read a lot about before coming to Austin, and also heard a lot about from local residents. It’s a fabulous little sushi restaurant run by Tyson Cole, the 2011 James Beard Foundation Best Chef, Southwest award winner (that’s a mouthful). We were hesitant to go at first because of the price, but lo and behold they have a Happy Hour from 5-7p during the week! Our incredibly informative AirBNB hosts let us in on that little secret. The Happy Hour means you get a taste of a larger dish at a fraction of the price – which meant Graham and I could basically eat more than half of the menu.

Honestly, I can’t even remember the names of half of what we ate, other than the fact that everything was uber fresh and expertly seasoned. The pork belly dish (pictured in the lower-right of the pic above) was remarkable, and the BROTH in each fish dish blew us away. Our incredible waiter went so far as to instruct us how to eat our Nigiri (upside down without soy sauce) so we would maximize the carefully-crafted flavors. Everything on each plate had a purpose, and worked together beautifully. For a barbecue and taco town, they sure know how to make some excellent sushi.

We made plenty of other stops along the way, but these were the clear highlights on our epicurean tour de Austin. There are way too many delicious food options to hit them all in one trip, but we sure did try! Next time, Gourdough’s is on the top of my list.